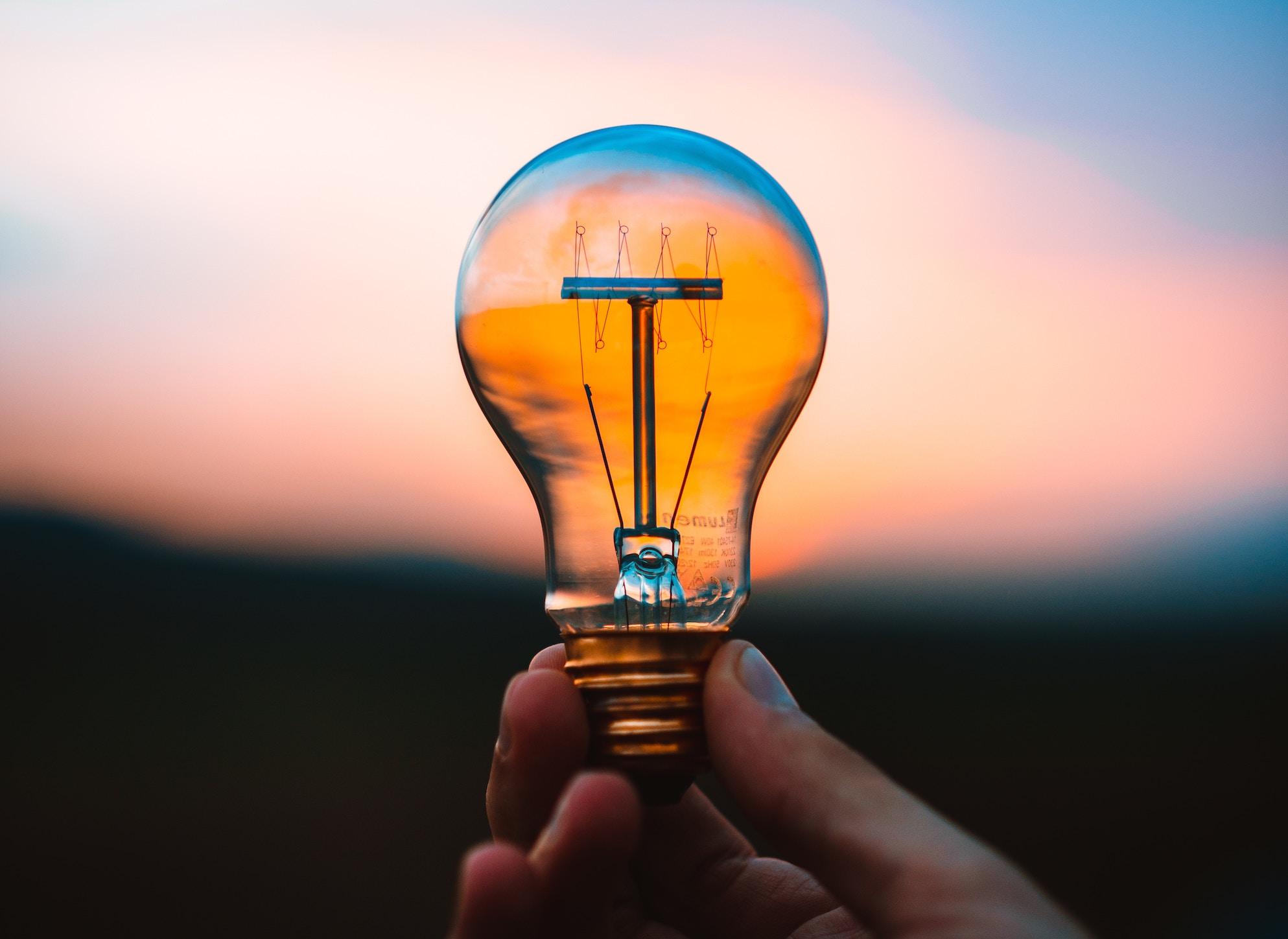 In 2016, Microsoft CEO Satya Nadella declared that “bots are the new apps” during a company developer conference in San Francisco. He wasn’t the only one who shared this enthusiasm about chatbots, though. The enterprise communication giant, Slack, even created an $80M investment fund for bot startups, and brands like Staples and Macy’s rolled out conversational AI-based chatbots for customer service. A plethora of bot platforms entered the market that allowed developers to create AI-powered, conversational chatbots across a wide range of use cases including chatbots for customer service.

A quick Google Trends search confirms increased interest in chatbots over the past few years, and concretely shows that interest leveling off in 2018.

There were some notable chatbot successes on platforms like Amazon’s Alexa, as well as WeChat. These platforms enabled thousands of bots, and made conversational commerce a reality.

In aggregate, however, there were significant shortcomings. Facebook messenger bots initially failed to fulfill 70 percent of requests. In 2016, Wall Street Journal users were finding it impossible to subscribe via chatbots as they discovered that they were getting re-subscribed as soon as they unsubscribed. These are just two telling examples.

Why did these chatbots fail? And what strategies were successful?

One large criticism is that failure stems from chatbots that do not target specific use cases: that they are too generic to be useful.

Facebook actually acknowledged this as an issue with its bots, saying that the company now trains Messenger bots to handle “a narrower set of cases, so users aren’t disappointed by the limitations of automation.”

Beyond the misaligned use cases, though, AI-enabled bot products have not implemented enough guard rails for users to be able to create high-utility bots. The tendency is to add in more complexity, which is difficult to properly configure, and in turn causes ‘frustration-loops’ for the user.

While there has been a leap in AI technology over the past few years, it is still incredibly difficult to program a bot to have an open-ended conversation with a human. Generalized AI is not a reality, as no solution has passed the Turing Test.

This begs the question as to why the predominant approach to building bots still centers around enabling them to have human-like conversations.

Let’s look at a chatbot that is based on natural language processing (NLP) available on the market today. It generally allows for a consumer to have a free flowing conversation with the bot. 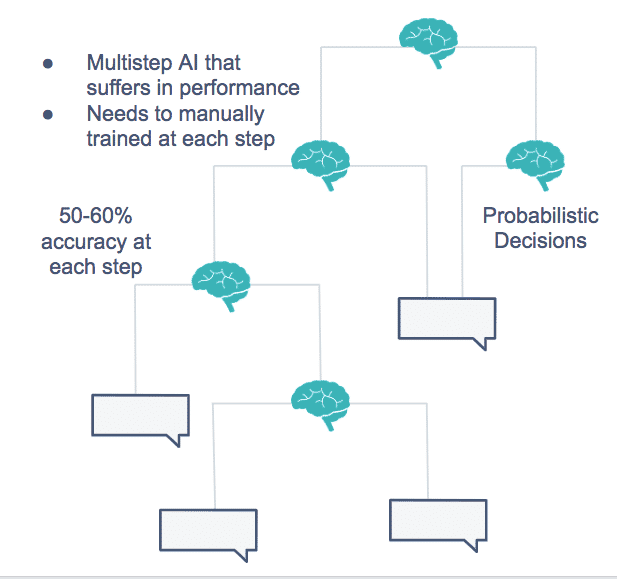 There is a huge flaw to this approach. Assuming that each bot step is modeled to yield an 80 percent probability of accurately understanding the user (an optimistic scenario), just two such steps in succession will yield only a 64 percent expected probability of working. A more commonplace scenario is 60 percent accuracy per step, resulting in a suboptimal 36 percent overall accuracy for a simple, two-step bot use case. 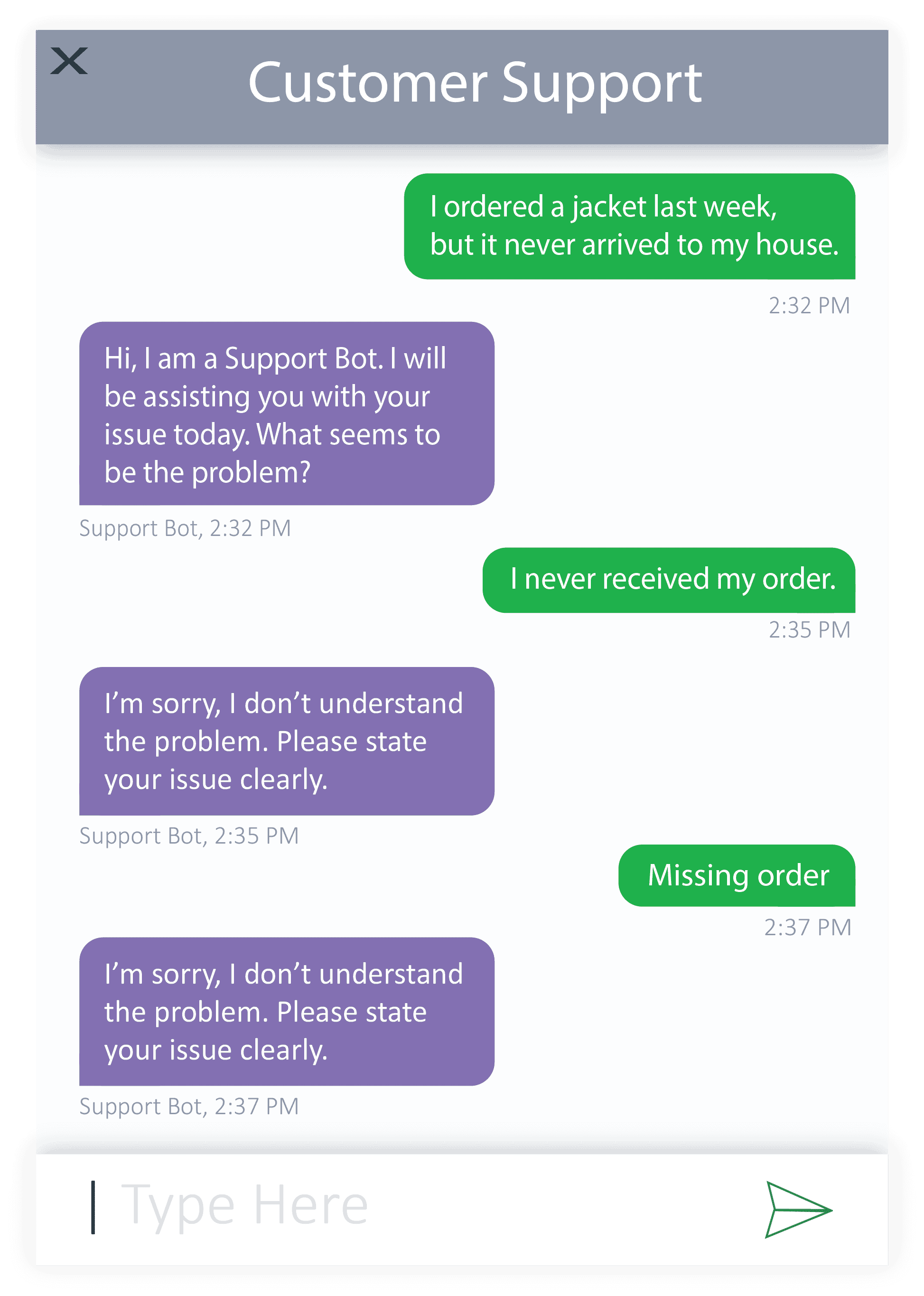 This means that in a large percentage of cases, an NLP-based bot is likely to frustrate the customer by saying something along the lines of, “I’m sorry I didn’t understand you.”

Even on the configuration side, there is a fair bit of work required to deploy just one bot. The administrator has to manually provide training data to assign an ‘intent’ to the initial user query. Then, the user needs to ‘fill slots’ — which means actually parsing the subsequent user input into a data element that can be acted upon. Depending on the platform being used, this step is again manual and highly probabilistic, i.e. the manual effort is proportional to the success rate of the particular step. 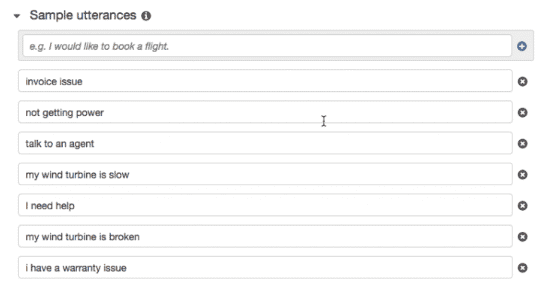 It is important to note that all this work has only enabled the administrator to respond to the initial query and ask for another user input. This same process is then repeated for even a slightly more complex bot flow.

This resource-intensive approach takes substantial effort to learn, hours to configure for even a single bot, and often leads to a dead-end or frustration loop.

How do we actually use chatbots successfully?

There are approaches that have been successful. 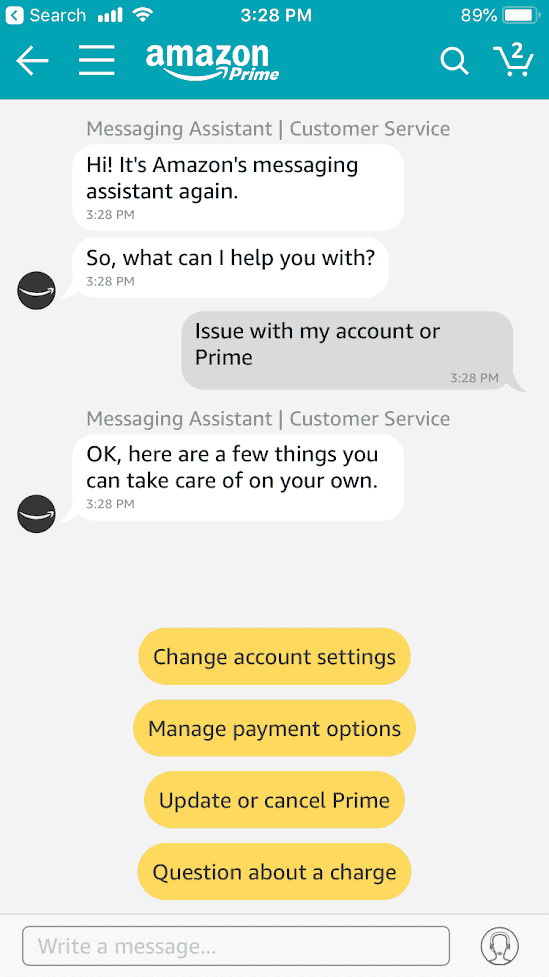 Once invoked, the app provides the user a set of options to choose from, and then once an option is selected, the bot follows a deterministic decision tree structure.

An issue such as returning a product or asking for a refund is taken care of with just a few taps, without any agent involvement on Amazon’s side.

This is a thoroughly pleasant experience as the customer never has to wait around for an agent to become available, and the issue is typically resolved within a minute or two.

What’s really interesting is that Amazon has one of the world’s strongest machine learning & AI teams — yet most of the core functionality in the app is executed via decisions trees and end-to-end automation.

When there is not a decision tree path that is suitable for the issue at hand, the customer is then routed to an agent to continue the conversation. This seamless handoff is easily facilitated through the messaging interface.

Using chatbots for customer service in this way minimizes potential frustration, and is achieved without fancy algorithms.

Our approach at Helpshift

At Helpshift we developed our bot technology with that same customer service-specific chatbot strategy in mind.

This decision has led to massive success within our client base, with some customers being able to fully automate (without human involvement) as much as 70 percent of incoming customer requests. Here’s the breakdown that we’re seeing in mobile gaming and associated results. 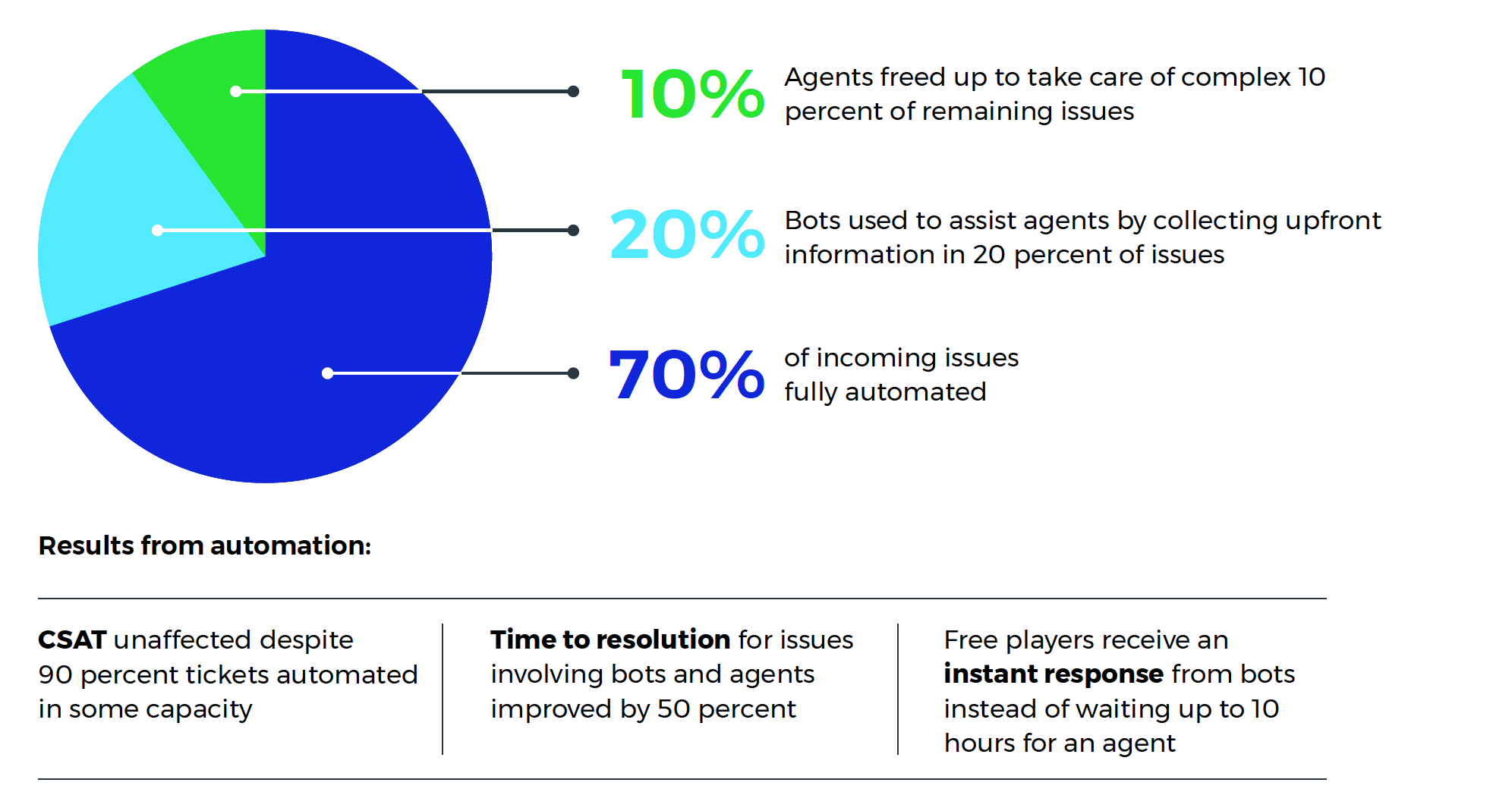 When we set out to develop our chatbot solution, we identified a set of clearly defined use cases. Many of our clients see the same types of incoming inquiries over and over. These repetitive issues were ripe for automation.

Whenever consumers have an online account or use a digital service, there is a significant percentage of incoming issues about account updates, password recovery, and troubleshooting.

A recurring use case in the gaming industry is account recovery — when a player is locked out. This single use case actually makes up 30-40 percent of routine interactions across gaming brands.

This is the perfect use case for bot-enabled automation. This is not an ‘open-ended’ conversation: a bot can follow the same script that an agent would otherwise.

That premise is the foundation for our chatbots for customer service here at Helpshift. Once an issue is labeled as a routine inquiry that can be automated, a use case-specific bot follows a series of decision tree steps to move the process along. The issue can either be fully automated and resolved accordingly, or be escalated to an agent if the existing predefined steps are not enough.

Here are some of the core characteristics of Helpshift’s specific chatbots:

Chatbots observations and learnings along the journey

A retailer might have an ‘Order Return Bot’, a ‘Reschedule Delivery Bot’, a ‘Check Delivery Status Bot’, and a number of other bots that can work independently — or be strung together. A single conversation can involve multiple bots and multiple agents.

Customers no longer have to wait on hold or navigate a complex, clunky web form to get their issues resolved. Help is available instantly and on-demand with chatbots for customer service, through a conversational medium that makes it easy for the customer to engage.

Despite all the great advances in AI technology, we’re still not at a place where a bot can replace a human. What we’ve learned is that bots can be amazingly successful, just as long as you don’t expect them to behave like people.

That brings us to the bottom line: chatbots for customer service work great when they are automating robotic work — work that humans shouldn’t really be wasting their time on in the first place.

User acquisition costs are the highest they have ever been. The reason is simple: more mobile app companies are in the business than ever before. More money is being invested…

How The Power Shifted From Companies to Consumers Anyone over the age of twenty remembers L.L Bean, Sears, and Lands End as being the purveyors of remote retail commerce. Their…

For so many customers, texting is the preferred mode of communication, and catering to that preference is a great step. But sometime’s it’s difficult to read customers just based on… 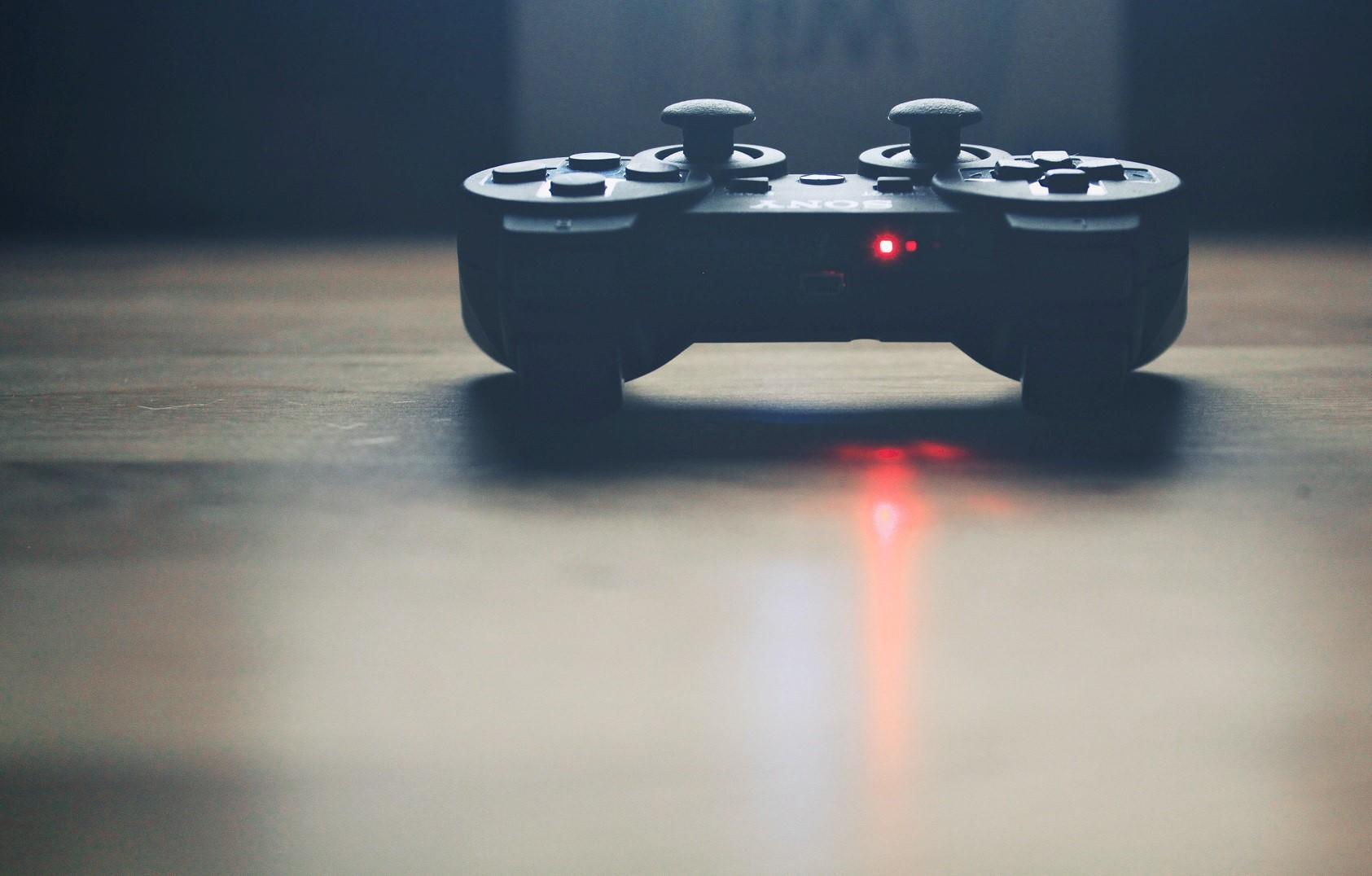 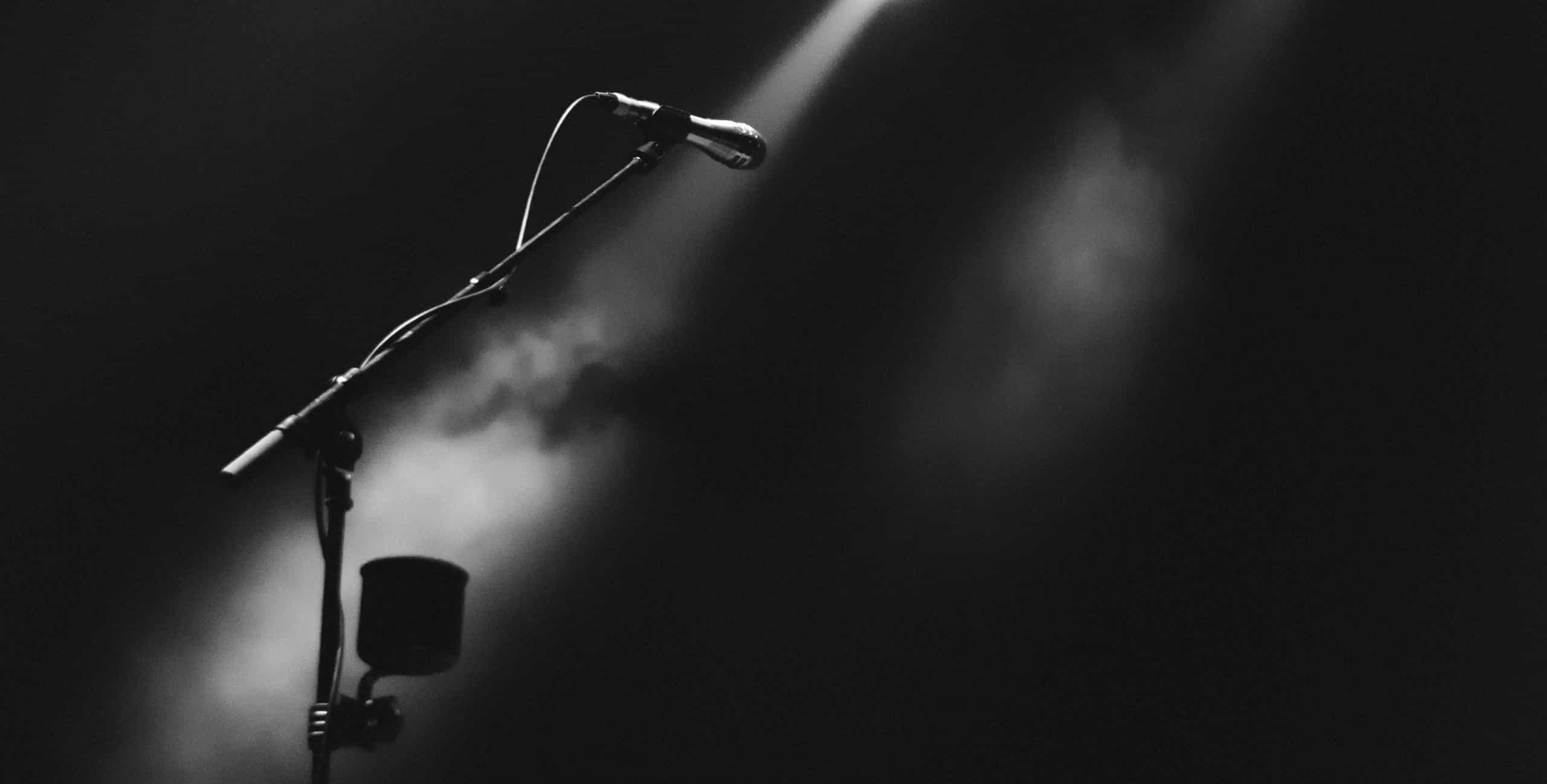